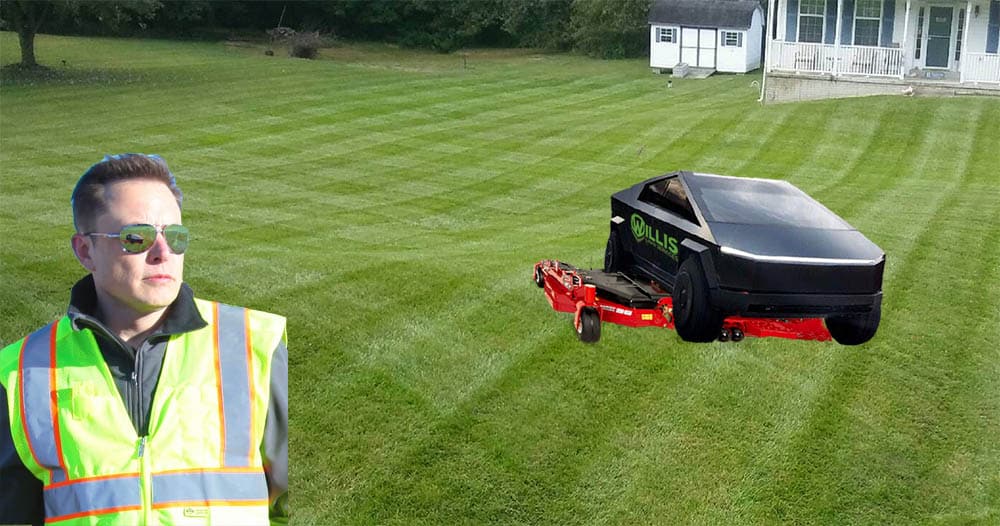 “This is really a game changer for our crews.” Kendal mentioned as he adjusted the AC to a cooler setting.

“One of the most challenging things about our work is how uncomfortable it is.” explained Eaton. “It’s literally 107 degrees outside today and our crews are going to be out there for 10+ hours. So there’s this huge pool of labor out there but because of the difficulty, heat, and blowing grass – it is a constant game of recruiting. The Cybermower has attracted all kinds of folks. Like last week we hired a senior software engineer from Boeing to run a mower. This morning I saw an application come through for the CEO of a recently bankrupt oil producer. We’ve just never seen anything like it.”

John Smith has only been with eXmark for two years. He was beaming during the unveiling ceremony for the Cybermower.

Smith has been highly praised by the Toro Company (eXmarks’ parent) for his innovative thinking and deal-making – a task typically accomplished the chief executive. “The Tesla partnership was important,” Smith explained, “but my executives were in total in support once they knew we had a partnership with Willis Lawn.”

Earlier this year an article was published on Yanko Design featuring a fan-made concept autonomous mower by Tesla. Tesla opted for the large-scale production mower at this time.

The Cybermower features a 146” rear-discharge mid-mount deck. “The deck is a larger version of our 96” deck.” explains Smith. “With 14 hours of run time, the Cybermower won’t require a charge on even the longest days. A typical gasoline mower will require re-filling after 6-7 hours of use.”

Gonzales was excited to no longer tow a trailer. “This one, it’s the good one [sic] because my guys like Carlos and Jose can run the weedeater, and if they run out of line I can drive the mower to them and take the line to them because it is on the truck already.”

When asked where this machine would be manufactured, Musk responded, “We chose Texas for our Cybertruck facility, but we are optimistic about a future in Oklahoma given the innovation that can be found here.” Elon laughs – “There seems to be a lot of sunshine here as well which is helpful for solar.”

When we asked the group whether they had any other concepts in the works, Musk said “You may consult my twitter history for that information.” as he winked at Eaton.

It’s safe to assume that Musk is referring to his response to Rainn Wilson early last year regarding an electric leaf blower.

See the full story on the leaf blower on Business Insider: https://wlsl.lc/elon

The Cybermower is expected to be available for purchase in Fall of 2021.